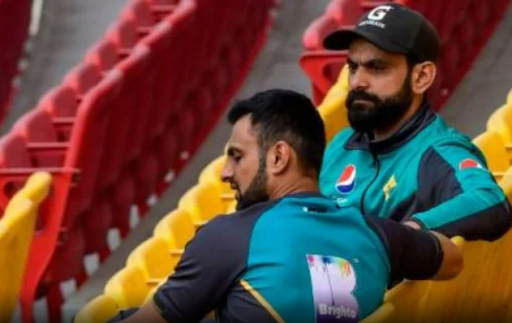 According to a Pakistan Cricket Board (PCB) official, experienced batsmen Mohammad Hafeez and Shoaib Malik will not play in next month's T20 home series against the West Indies.

Due to personal obligations, Hafeez and Malik have notified Pakistan captain Babar Azam and head coach Saqlain Mushtaq that they will be unavailable for the season.

According to a source from the board, Malik has stated that he wishes to concentrate on playing in T20 competitions and that Pakistani authorities should only consider him for major series. Malik was included in the Bangladesh T20I squad; however, he was unavailable for selection for the final match due to his son's sickness.

The source added that Hafeez has stated that he will miss the West Indies game due to his commitments with the Lankan Premier League. The 41-year-old also missed the Bangladesh series. The coaches should offer some young players an opportunity.

The board also said that instead of waiting for Hafeez and Malik, they have agreed to start offering greater exposure to athletes like Haider Ali, Sohaib Maqsood, Khushdil Shah, Iftikhar Ahmed, Danish Aziz, and Azam Khan to train them for the upcoming matches.

Former Pakistan skipper Salman Butt responded and said that despite the two veterans having made major contributions to Pakistan's cricket success, now is the right time for the younger ones to shine.

Butt suggested that a candidate like Mohammad Wasim Jr be fostered for the post. Given his strong results in the lengthier format, Butt also stated that Faheem Ashraf might be called up for limited-overs contests.

The former opener also believes that because Ashraf has been a member of the national team for some time, he should be prepared to deliver whenever the occasion arises.

Butt also criticized the PCB for the remuneration package for First-Class cricketers. He believes that, like India, Pakistan should offer departmental employment to cricketers on the home circuit. He stated that given their current incomes, it is tough for the players to maintain their food and fitness as well as their family obligations.